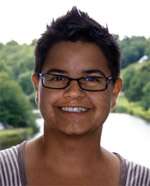 Kerry-Anne Mendoza is Editor-in-Chief of The Canary. She is known for creating one of the UK’s top independent political blogs (Scriptonite Daily), for authoring the best-seller 'Austerity', and for her Middle East reporting (notably Operation Protective Edge from Gaza through the Summer of 2014). Her passions are politics, economics and current affairs, which she examines with the basic question: "How do we build a world that works for everyone?" Growing up in working class Kingswood, Kerry-Anne had no idea of the ground breaking work her West Indian grandfather had done for racial integration in the city. Finding out the full story at his funeral, when she was 18, she could suddenly made sense of the pull she felt to tell the stories that raise and tackle the world’s inequalities. Kerry-Anne tells her story, from a first visit to Palestine in 2002, through a career in the banking industry, before breaking out into the Occupy movement and never looking back.