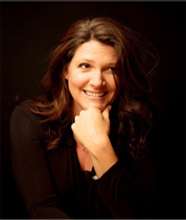 Coming from a broadcasting family with a mother who sang opera over breakfast, Kate has spent 20 years touring theatrical shows about other people's voices and stories – hiding behind the smooth sophistication of Peggy Lee, the bold blues of Bessie Smith, the fragile tones of Dory Previn. But she always had another nagging voice in her head saying, “What's my story and why aren't I singing it?' In this talk, she describes her path to finding her own voice by embracing vulnerability, singing with others - and realising that the place where everything goes wrong, is where the magic is. Kate has released five albums between 1999 and 2014, produced 6 international theatrical shows and appeared regularly on national radio.  She's toured the world with her one woman shows, selling out venues like the Festival Hall and Ronnie Scotts and working with some of the best jazz musicians in the country. Her latest album Songbirds features original songs recorded a capella, layering her voice instead of using instruments, with techniques inspired by learning from vocal virtuoso Bobby McFerrin in New York.